Why “Powder/Ombre Brows” technique is better than “Microblading/Hair Strokes”

I know hair strokes (“Microblading” or “Nano Brows”) look the most natural in the before and after pictures when they are freshly done. Trust me, that is what got me into this whole industry!  One day, I saw a picture of perfectly microbladed eyebrows, sometime in 2015, and I wanted, no needed, them done for myself! I thought it was the perfect solution for my sparse eyebrows, plus it was advertised as ‘semi-permanent’, so no long time commitment, right? If I did not like them, I could just let them fade away and not get them done again and be done with it.

Everything was going great!  I was enjoying microblading; I was happy and most importantly, my clients were happy!  I was not even thinking about doing anything else, I thought microblading was the best thing that happened to humanity…ever! (after Nutella, of course).  But, eventually, I started to notice that the results were not as consistent as I would have hoped for.  Some clients would come back for their touch-up with pigment retention close to 99%! Others would come back with almost nothing left. Some clients would have crisp hair strokes, some would have blurry and more solid-looking strokes.  My training most certainly did not prepare me for this. Thank god, my pressure was always consistent and proper, and I never had a client come back with scars or purple eyebrows (I learned this is a very common microblading side effect when done by poorly trained or inexperienced practitioners).

I am such a perfectionist, that I was always questioning myself, why my results were not always consistent, what I was doing wrong.  I was researching for the answers day and night.  I tried many the top of the line pigments, the best microblading tools, different aftercare instructions, you name it, I tried it.  Spent thousands of dollars and tons of time! The results seemed to remain the same, too inconsistent for my liking.  Then I saw something in my research! I started seeing all the articles from people who were in the business for many years (mostly artists from overseas) about why microblading is not good and why it should not be performed anymore.  I thought they were just bitter, what with the influx of all the new artists/companies taking all their clients or potential clients, trying to make a quick buck off of what they saw as a fad.  Make no mistake, there are many out there simply going through the motions just trying to make a quick buck!  Many of whom have the bare minimum training/licenses/certifications required and worse, some without any training or required licenses! Another reason might have been that their techniques were old and out of date.  They had no idea what they were talking about!  But, as I continued with my research, this is when I learned about “Nano brows”.

Nano Brows is a different technique to do hair strokes using a single needle and a digital machine, instead of using a microblading hand tool. I thought OK, maybe I should learn more about this and see what it is all about.  So, I did my research on the technique and also the best trainers worldwide.  Eventually, I found Monica Ivani[ii] from Dublin, Ireland.  Monica’s work is by far the best I have ever seen. I thought there was no way to achieve thin hair strokes with a machine, but she proved me wrong.  I reached out to her and as luck would have it, she was just getting into the teaching business!  After some chatting back and forth she agreed to teach me her technique, so I booked my flight and did a 3-day one-on-one training with her.  To say the least, it was amazing!  I thought I finally found the answer for perfect and consistent hair strokes.  It is far less traumatic for the skin than microblading and pigment retention in most cases is better.  But, little did I know that eyebrows were done with this technique, whilst still better overall than microblading, still just did not have the consistent look I was wanting after the healing process.  There are only about 20% of clients who will heal with ‘perfect’ hair strokes, but still, it is only temporary.  This also comes with a caveat, YOU MUST FOLLOW THE AFTERCARE INSTRUCTIONS PROVIDED BY YOUR PRACTITIONER to even have a chance.  Other factors that can affect your outcome, if you have combination/oily skin, large pores, wrinkles on the brow area, if you work out regularly don’t even think about it.  Your brows will heal far from looking like hair strokes.

This is the point at which I almost gave up, but then I found, ‘Powder/Ombre Brows’.  After doing more research and talking to a lot of seasoned artists, who had done hair strokes for years and just like me, were not seeing the consistency they had hoped for, they began to switch to soft shading, otherwise known as the ‘Powder/Ombre Brow’ technique over the years.
Through my research and talking with others in the field, I began to learn and understand why so many were switching from microblading whether it was with a machine or a manual tool to the ‘Powder/Ombre Brow’ technique.

Let me tell you the science behind microblading what happens to your skin/brows, even if you get them done by the best artists in the world. Even if you have ‘perfect’ skin for hair strokes (normal to dry or dry, no visible pores or wrinkles in the brow area, you do not work out regularly and you have no medical conditions) your skin is still a living organism, not a piece of paper.  You still have pores, oil glands, blood vessels, and the pigment will mix with everything.  Everybody is different!  Everybody reacts differently to the process.  Microblading at its core is an art form, done by humans, not robots, therefore it is unreasonable to expect a human being to put each hair stroke on the exact same depth in the skin that is why some hair strokes will start fading faster than others, making eyebrows look patchy after a few months, even if they healed perfectly at first.  When skin is regenerating, new skin cells are rising to the surface, they move left and right as they raise up and if those skin cells have pigment in them, it will cause pigment to migrate slightly, making hair strokes appear blurrier and not so crisp anymore.  When you come back for an annual touch-up more pigment will be deposited in the skin and your artist cannot possibly hit the exact (again, not robots) the same strokes again which will cause the hair strokes to appear even blurrier.  Most likely, after doing few annual touch-ups you wouldn’t be able to see hair strokes anymore, because the pigment will migrate inside the skin and will look more solid, and all the spaces between previous hair strokes will be filled in.

This is where ‘Powder/Ombre brows’ (soft shading) comes in!  Powder/Ombre brows, on the other hand, will age a lot better.  The brows will just fade over time without noticeable gaps and are not going to look as patchy after a few months. It is the least traumatic procedure which has the least chance at causing scarring if done properly of course.  You can have it as natural looking as an eyebrow tint to more like brow makeup done with powder, not even a pencil.  You have to remember that regular makeup is applied directly over the top of your skin and permanent makeup is applied inside the skin (that’s why it looks a lot darker right after the procedure because it is still on the surface of the skin) which enables us to create very bold looking eyebrows with “Powder/Ombre Brow” method.

I hope my research and experience that is in this post make sense and helps you to understand the difference between hair strokes vs. the powder/ombre brow technique. I hope you learned why I prefer the second one.  My clients who book microblading always say they want their brows to look like mine when they see me; I have to always tell them, if that is what they want, then what they really want are ‘Powder/Ombre Brows’ because this is what I have 😉

We would like to answer your questions. Please send us a message with the details filled in the contact form given below and we will get in touch with you. 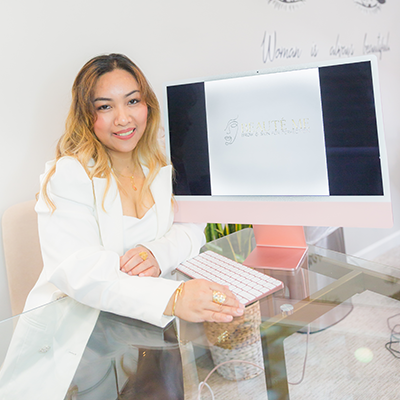 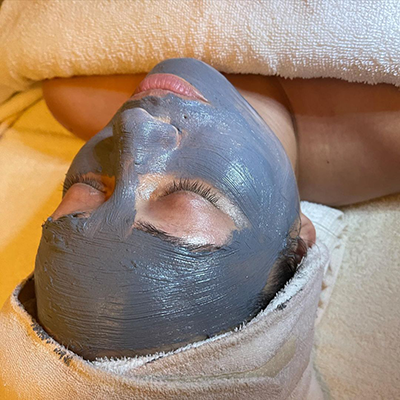 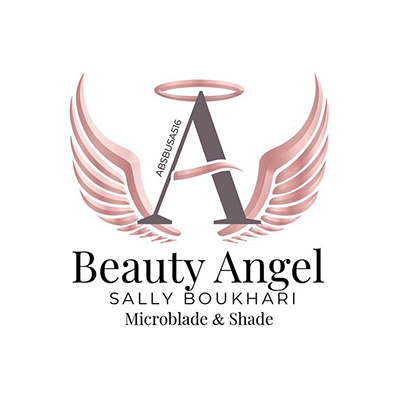 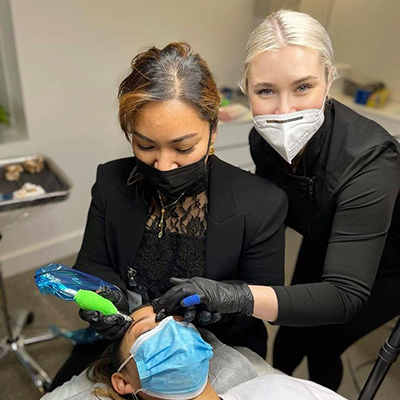 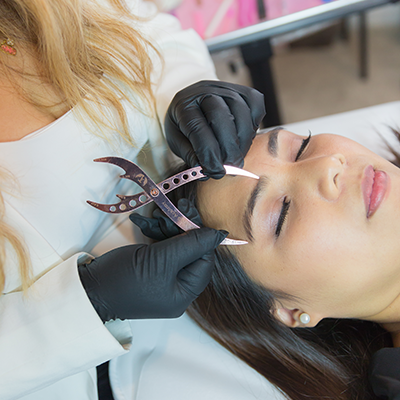